The Origins of the Picts – Part 4 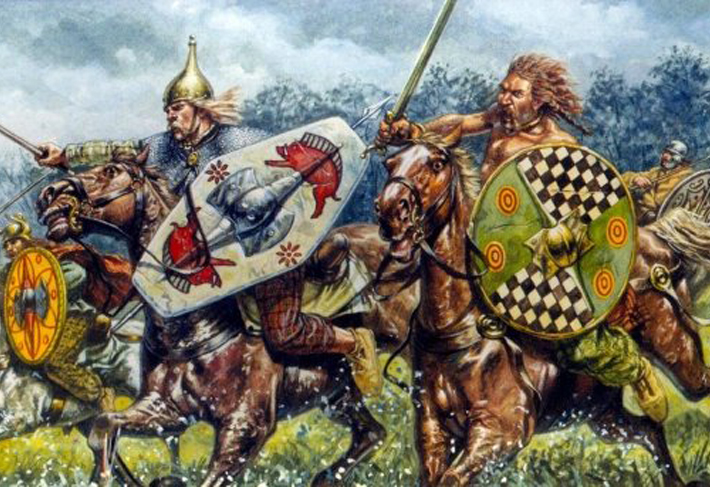 ‘Seven of Cruithne’s children divided Alba into seven divisions, the portion of Cat, of Ce, of Cirech, children with hundreds of possession, the portion of Fib, of Fidaid, of Fotla, and of Fortiu. And it is the name of each man of them that is on his land.’

In the first article of this series, we looked at the earliest origin legend relating to the Picts; recorded by Bede in the eighth century, and derived from Irish sources, this tale gave little indication of what comprised Pictavia, as the homeland of the Picts was called by many chroniclers. The snatch of poetry quoted above, and recorded in Pictish King lists of the tenth and eleven centuries, is the closest we have to a Pictish origin legend. The story, however, refers not to the origins of the Picts as a people, but to the emergence of Pictavia; the names of the seven sons of Cruithne may actually refer to the seven provinces, or seven tribes, which made up Pictavia: Fib is Fife, and Cait Caithness; Fotlaig can be recognised in Atfodla, the old form of Atholl, whilst Maghcircin, the plain of Circinn, is thought to refer to Angus and the Mearns; Fortrenn is the area around Menteith and Strathearn, which is frequently mentioned in early sources. The name of Ce may be seen in Bennachie, a mountain north west of Aberdeen and the probable site of the battle of Mons Graupius, meaning that Ce would relate to Aberdeenshire, leaving Fidach to be linked with the Moray Firth area. 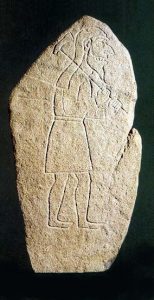 Pictavia had no urban settlements. Instead, the departure of the Romans coincided with the appearance of oval shaped hill forts, which had a clear military purpose, in sharp contrast to the earlier, and much larger, hillforts of the late bronze age, such as the white and brown caterthuns. They were the citadels of the Pictish kings and sub-kings, as at Dundurn in Perthshire, whilst a recent archaeological dig has uncovered a previously unknown Pictish ritual and/ or royal enclosure on the site of the evocative ‘Rhynie Man’ standing stone. Measuring six feet tall, the ‘Rhynie Man’ appears to refer to pre-Christian rites and sacrifices, and, indeed, may well represent a Pictish druid. He is portrayed as bearded, beady eyed and sharp toothed, with hair grown long at the back, but shaved back from his forehead and the sides of his head. This distinctive druidic ‘mullet’, or tonsure, was also adopted by early Columban holy men, but was abandoned in the seventh century when the Columban church fell into line with Roman practice. In addition to his distinctive hairstyle, the Rhynie Man is shown carrying a large axe, which is, again, associated with bull sacrifice, an important druidic role. 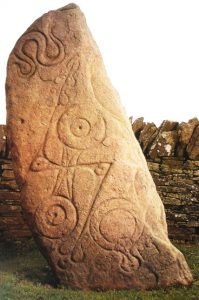 The ‘Rhynie Man’ is one of the most evocative of the symbol stones that are so strongly associated with Pictish identity; they occur in particularly dense clusters in Angus, Aberdeenshire and around the Moray Firth, areas identified closely with the emergence of Pictavia in the fifth and sixth centuries. These stones with their repertoire of beautiful animal imagery and semi-abstract symbols, such as the double disc and Z rod, are thought to date from the fifth century onwards. In their earliest forms they are found without any Christian symbolism, as with the knife shaped stone at Aberlemno, with its incised snake, double disc and Z rod, and mirror and comb. Their creation was probably influenced by Roman funerary art, which would have been all too familiar to many Picts who had taken part in raiding expeditions against Roman and post-Roman Brittania. Most historians agree that the symbol stones acted as funerary art and/or boundary markers, and that the symbols, such as at Aberlemno, were a form of hieroglyphics referring to individuals and/or lineages associated with Pictish society.

This has been borne out at Rhynie, where a wealth of high status finds have been unearthed, including a wine amphora from the southern Mediterranean, and an elegantly wrought glass drinking vessel, both dating from the late fifth century. It appears that Rhynie was a site of Mediterranean style wining and dining in the decades following the Roman withdrawal, whilst these discoveries also suggest that Pictish nation building occurred much earlier than previously thought. Rhynie is situated within the Pictish sub-kingdom of Ce, corresponding to one of the epicentres of Caledonian resistance to Roman rule; the site has been interpreted as a ‘royal centre’ where the sub-king of Ce would entertain other sub-kings and, indeed, the High King of Pictavia himself, as well as visiting dignitaries and the warriors of his own bodyguard, or comitatus.

Whilst Greater Pictavia was made up of seven sub-kingdoms, a further bipartite division between southern and northern Pictavia has also been identified, marked by the imposing boundary of the Mounth, where the Grampian mountains almost meet the North Sea, south of Stonehaven – the natural corridor between mountains and sea was known as ‘the swordland’ to the Picts, and their enemies. The citadels of the northern and southern kings of Pictland have not been identified, although the Moray Firth/Inverness area and central Forfarshire respectively are their likeliest locations. It is believed that the Pictish over-King was selected, or elected, from eligible candidates (possibly dependent on matrilineal descent) among the sub-kings of the Pictish provinces, which draws attention to the ‘democratic nature’ of the Picts, as commented upon by Tacitus in the first century. The Kings of Pictavia were the elected leaders of the Pictish tribes, not the absolutist lords of land and people, as with future Kings such as William I of England or Louix XVI of France.

Pictavia would survive and thrive for over four hundred years, before being subsumed within the new Kingdom of Alba in the mid ninth century. In the next and concluding article of this series, we will examine the challenge to the independent existence of Pictavia that was posed by the emergence of Anglian power in Northumbria, and the even more far reaching challenges that came in the wake of the Viking invasions.