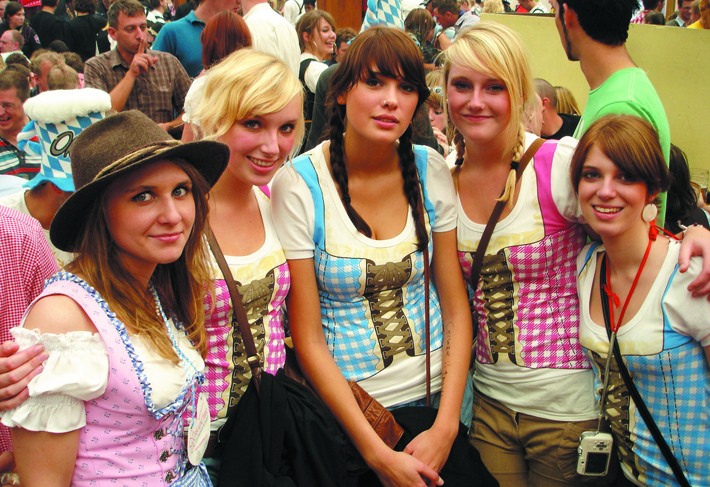 A taste of the Bavarian Oktoberfest, the largest beer festival in the world, is coming to Dundee’s City Square this November. A flavour of this important part of German culture since the early 1800s is touring Europe, and Dundee is one of the lucky cities to have been chosen. Music, beer, food and dancing under a festival tent with waitresses and waiters dressed in traditional dirndl and lederhosen sounds like the perfect recipe for a cauld Scots autumn day! 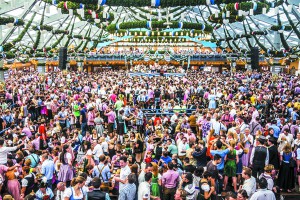 When Crown Prince Ludwig, later to become King Ludwig I, was married to Princess Therese of Saxe-Hildburghausen on October 12th 1810, the citizens of Munich (the capital city of Bavaria) were invited to attend the festivities. The celebrations were held on the fields in front of the city gates and ‘Oktoberfest’ was born. Since then, however, the Oktoberfest has become very much a public festival for the nation’s people, as well as an internationally recognised party destination for visitors from all over the world. The Oktoberfest is now known as the largest Volksfest (peoples’ festival) in the world. Only beer conforming to the Reinheitsgebot (beer purity law) can be served at a traditional Oktoberfest, so the beverages for Dundee’s Oktoberfest will be coming fresh from Bavaria! 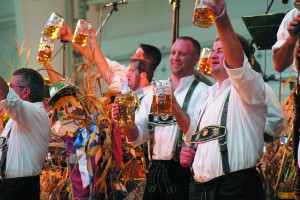 Germans coming to Dundee with music, beer and food; what a great new idea, you may think. However, it’s not such a novel concept as Dundee has long been a friendly trading partner with German ports. Back in the 16th and 17th centuries our independent Dundonian merchants were eminent traders with the ports of Germany and that is why many words in our Scots language and Dundee dialect are heavily influenced by this ‘Deutsche lingo’… Lang, Toon, Loch, Ken and Hoos are just some of the words we still use today!

So it’s great to see friendly German traders venturing back into Dundee once again. Who knows what new influences we will pick up this time? You never know, maybe future Oktoberfest hosts will be speaking with a wee bit of the Dundee dialect and wearing kilts! Now that’s a recipe for a real Dundee Oktoberfest! 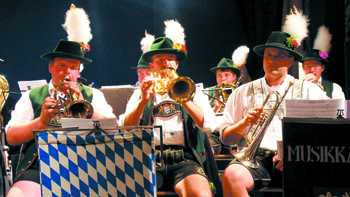 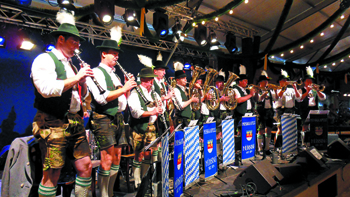 We spoke to Stine, the tour organiser, and asked her what the Dundee people can expect from this Oktoberfest, that runs for five nights from the 4th of November,

“The tent is filled with long tables, we serve delicious food and giant beers which are specially made for the Dundee Oktoberfest, and it is certain that you will not sit for long before you want to sing along and maybe stand on the benches. This is true Oktoberfest – sing along and just have fun!

“Our band will travel from southern Germany and be there to play wonderful live music to support the atmosphere. The theme is modern Tyrolean music and we guarantee that you will stand on the benches and sing during the evening, it’s just fun – come and join in!” 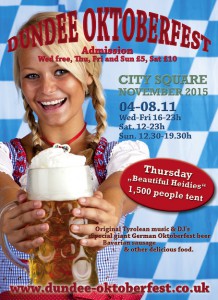 The Sunday is a family day, complete with bratwurst-centred lunch options and the oompah bands promise to have you dancing to hits like ‘Zikke Zakke’ and ‘Ein Prosit der Gemütlichkeit’ (don’t worry, they’ll help you!).

Entrance is free on Wednesday. On Thursday, Friday and Sunday there will be a £5 fee and on the busy Saturday a £10 entrance fee.

So come and enjoy the amazing atmosphere at the Dundee Oktoberfest 2015 and don’t forget to check their online lederhosen shop and come dressed like a real Bavarian!

Get your tickets early by booking online. For more information, to book tickets, or to buy your dirndls and lederhosen please visit: www.dundee-oktoberfest.co.uk