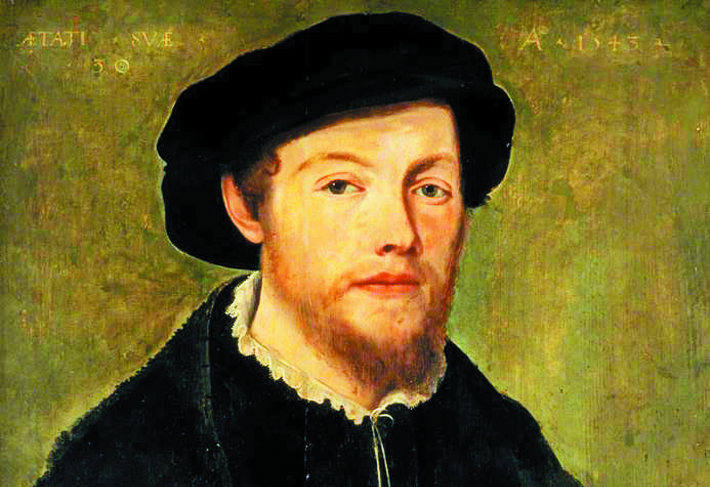 For some Scots the Reformation is something of an embarrassment, a part of our shared history that is best left unmentioned, or, where it is acknowledged, as little more than a religious squabble that created a society dominated by ‘Holy Wullies’, the repentance stool and witch hunting. Whilst there is a grain of truth in this characterisation, the Scottish Reformation was also part of a wider religious, political and social movement that swept across Europe, and which paved the way for the advent of the modern world. And, for a brief time in the mid-sixteenth century, Scotland was viewed throughout Europe as a formerly backward country that was attempting to completely re-make itself, to institute the rule of heaven on earth through a thoroughgoing reform of the Scottish Church.

The leaders of the Scottish Reformation aimed at social transformation by using the wealth of the religious houses to create a universal system of educational and welfare provision that would be the envy of the civilised world. Whilst many gave their lives for these principles, one name stands out above all others – George Wishart, who can rightly be described as the father of the Scottish Reformation. Born in 1513, Wishart came from a respectable Mearns family with royal connections. He studied at King’s College Aberdeen before becoming a school teacher in Montrose, but was forced to flee to Bristol in 1538 when his heretical views on the corruption of the Scottish church came to the attention of the Bishop of Brechin.

After exile in England and on the continent, where he visited Geneva and mixed with some of the leading European reformers of the day, he arrived in Dundee in July 1543 filled with a desire to re-make his native society. Dundee was Scotland’s second port and urban centre behind Leith and Edinburgh; its merchants had long-standing links with the major European ports where they bought up silks, wines, spices and other luxury goods. It was not only trade goods that they brought back to Dundee; English language bibles were also illicitly imported and were sought out by curious Dundonians despite the death sentence that awaited if they were caught with them.

Following his arrival in Dundee, Wishart immediately threw himself into a ceaseless radical preaching that effectively launched the Scottish Reformation as a movement of ordinary people. He chose as his main Biblical text ‘The Epistle of Paul to the Romans’, a violent denunciation of pagan religious leaders who ‘professing themselves to be wise… became fools’, and which also railed against their corruption, hypocrisy and sexual abuse.

Throughout July and August of 1543, Wishart used this incendiary text as a barely concealed indictment of the Scottish Kirk of his own day. His fiery sermons drew large crowds of angry townspeople, and on the last day of August, Dundee effectively became the crucible of the Scottish Reformation when it finally exploded in a frenzied political riot that targeted one of the town’s most visible symbols of religious power and corruption, Greyfriars Monastery. 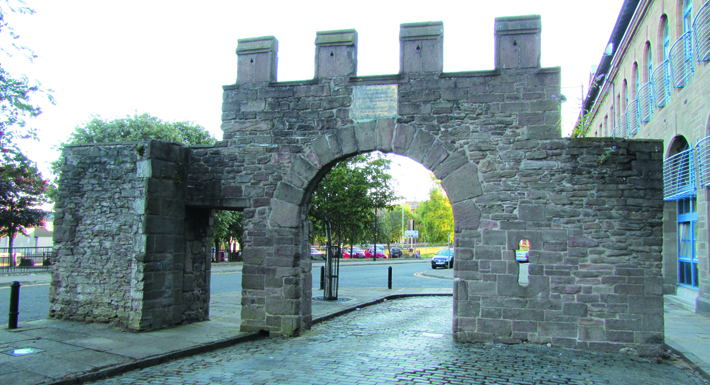 Situated on what is now the Howff cemetery, the monastery had played an important part in Dundee burgh life for nearly 300 years. On that fateful August day of 1543, however, the monastery grounds rang not with the sound of evensong or pealing bells but with the clash of steel and falling masonry as around 150 of the town’s inhabitants, according to the indictment that followed, took;
‘art and part in the oppression committed on the Friar-Preachers and Minorites [friars] of Dundee, by coming to their Places within the burgh… in great numbers, armed in warlike manner, and there breaking up the doors and gates of the Places, and breaking and destroying the ornaments, vestments, images, and candlesticks, carrying off the silvering of the altars, and stealing the bed clothes, cowls, etc, victuals, meal, malt, flesh, fish, coals, napery, pewter plates, tin stoups, which were in keeping of the said Places.’ 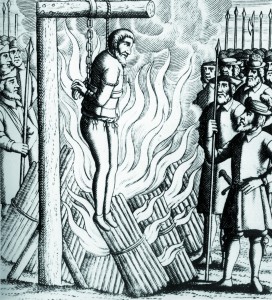 Only three years after the storming of Greyfriars Monastery, Wishart would join the growing list of Scottish martyrs when he was executed outside the walls of St Andrews Castle in March 1546. He was first garrotted, and then wooden fags were set alight at his feet and his clothing was packed with pouches of gunpowder to provide extra amusement and sport for the bored ladies of the castle who gathered to gawp at the grisly entertainment. Wishart’s judicial murder sparked outrage, but also revolution when, three months following his death, a small group of reformers succeeded in seizing St Andrews Castle and murdering Scotland’s leading cleric, Cardinal Beaton, for his central part in Wishart’s gruesome end. Beaton was stabbed to death in his own bedchamber and his mutilated body was hung from the same window from which he had watched Wishart’s execution. The seizure of St Andrews Castle launched the second phase of the Scottish Reformation, but it would still take nearly two decades of further turmoil before a new Scotland finally emerged. It would not be the heaven on earth envisaged by Wishart, and his fervent disciple and bodyguard, John Knox, who played a central role in realising the dream of ‘Master George’ – it remained a poor country, but one marked by a widespread respect for popular learning and the democratic intellect, surely a legacy to be proud of and one that continues down to the present.