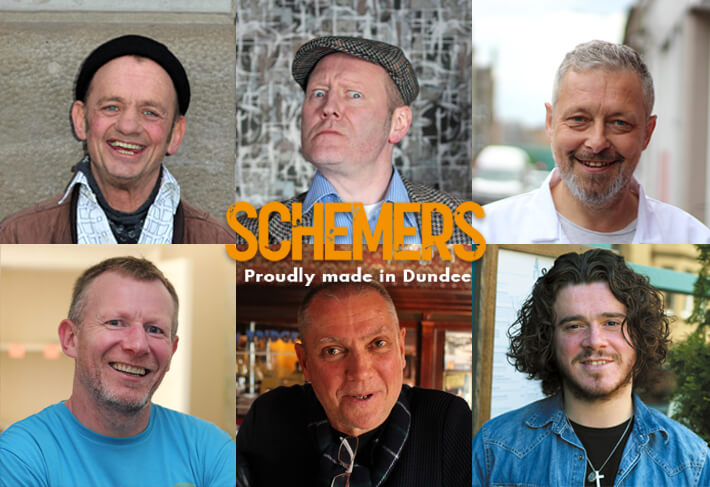 This movie couldn’t have been made with such passion and authenticity if it wasn’t for some of the real-life schemers involved in the film; those who actually grew up among the tenements and tower-blocks of the Dundee schemes. We caught up with some of them to find out what they thought of the movie and their experiences of making it onto the big screen. 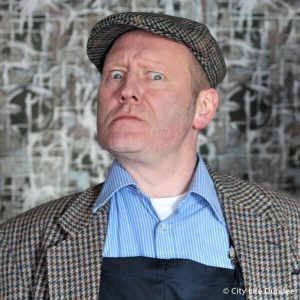 Just like a comedy scene out of the Schemers script itself, Kit had rushed up to Scotland straight from a London theatre performance, jostled his way through to his seat, sat down and grabbed a breath, but only in time to see the final scenes and the credits rolling! 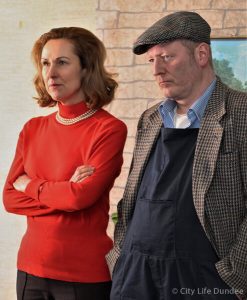 “Seeing it at the movies is an actual experience, so I cannae wait to see the full movie on the big screen, no’ just the last ten minutes, ha ha! I’ve now seen the full movie on a PC screen and the key thing for me, wiz looking to make sure that the on-screen relationships wir convincing, particularly the relationship wi’ Wullie and Moyra. Eh’d never spoken to the actress playing Moyra and then, all of a sudden, the crew shouts “action!” and Moyra turned around and spoke to me like eh’d actually been getting on her nerves for the past twenty-seven years! Ha ha ha!”

We asked Kit how he felt about being in a movie with his boyhood hero, Saint Andrew, and using the Dundonian dialect…

“It wiz easier than being on the same stage as uhm, cause in the movie he’s in a different scene. If you were on stage with him back in the day, yih never ever knew what he wiz gonna dae next, so it’s certainly safer being in a movie, ha ha ha! Just remember that if yir only yaisin’ Dundonian expressions people might think your speakin’ aboot something completely different than what yir actually speakin’ aboot! If yir talkin’ to an artist aboot circles they might no’ ken yir actually talkin’ aboot the Five Ways Roundabout in Dundee!” 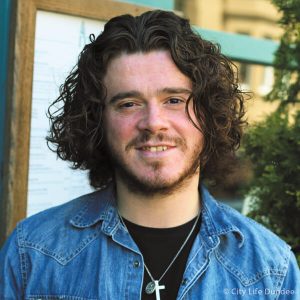 Brought up in Dryburgh (Lochee Fleet)

Singer, songwriter and musician who has a cameo role in Schemers.

“Eh remember being on the treadmill in Thailand, when I was in rehab, and first hearing aboot this new Dundee movie being made, and to now see it on screen and to see all the Dundonian things happening and people speaking Dundonian, it’s something that’s never been done. It felt great tae see masel’ on the screen and tae hear meh sangs, goin’ through a’ that, honestly, me an’ meh lass were smiling fae ear to ear, the joab could’na huv been done any better. Eh think it’s really gonna put Dundee on the map.” 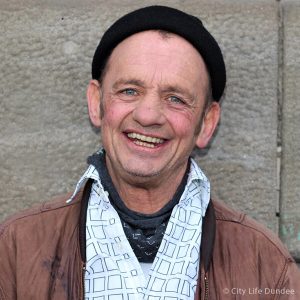 Brought up in Mid Craigie (The Mid)

“It wiz a wee bit o’ a tribute tae play a jakeball wino in the movie, and if it made meh femily smile then eh’m happy, ha ha! It’s oor wiy o’ life, ken, this is oor tongue we yaise every day. Oor dialect has got rhythm and it’s got soul, it’s art when yi speak. Humour is a’ through oor dialect, it’s quick, it’s sharp, it rolls aff the tongue, ken. As soon as yih turn oor dialect intae English it loses its soul, it loses its frequency, and it therefore loses its natural funny vibration. Yir tongue is yir connection tae yir ancestors, an’ when yih stop speakin’ yir native tongue yi loose yir connection tae yir ancestors”

Watch the ‘Dundee Voice’ of Kev McCabe in the video below… 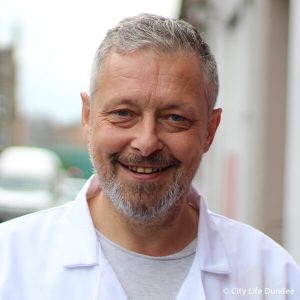 Brought up on the Tap o’ the Hulltoon (The TOTH)

Actor and writer, recently in BBC Scotland’s The Rise of the Clans, has a cameo role.

“It’s aboot time stuff like this has come oot o’ Dundee, real stories aboot real people. Meh favourite scene wiz when Gordon Morris put the Deep Heat lotion on Davie’s broken leg, eh wiz pishin’ masel, it wis genius, ha ha ha! It’s aboot time people stopped and listened tae us and made an effort tae understand us. So, listen tae what we’re sayin cause we huv got somethin’ tae say, an’, if you can try an’ understand what we’re sayin’, yul learn something fae us, yul git to know the culture better and yul get a laugh! When yih listen tae Dundonian, yir hearin’ a language that has built up o’er a lang, lang time wi’ many different in‑ uences. It’s no’ a dialect that yih learn, it’s a dialect that yih live. It’s oor language, it belangs tae us.” 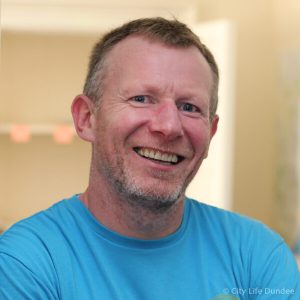 Actor in AMC’s The Terror, BBC’s Armchair Detectives and currently filming a Netflix show. Has a cameo role. 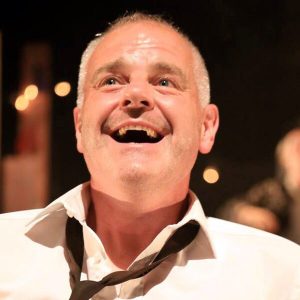 Voice-over artist, actor and full-time postie, has a cameo role in Schemers.

“There are no prouder people than Dundonian fowk, and to see the city captured in all its beauty on the big screen was amazing! The Dundonian accent is how I speak, how I learned to speak, it’s where I come from and, for me, it’s definitely part of my identity and part of who I am. Growing up in the seventies in Douglas, I don’t recall many people who didn’t speak Dundonian! Dundee is a massive part of who you are and its history is rich in culture and diversity. Speaking Dundonian doesn’t mean you’re any worse off than anyone who thinks it’s not the correct way to speak.” 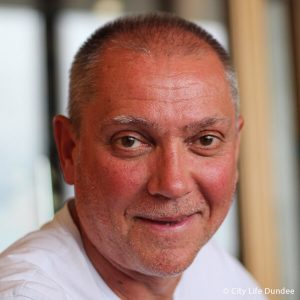 Brought up in Whitfield (Whitfield Shams)

The dreamer behind Schemers, whose real life is portrayed in the film.

“The wee laddie fae the schemes beat the big boys, eh?! To make the film was an achievement, to get to Edinburgh Film Festival was an achievement, to be nominated for an Audience Award was an achievement, and to win it is a dream! Dundee is always getting put down, so it’s good for Dundee to now get “a kick o’ the ba’” as my dad used to say. Eh’m lucky that I’ve met a lot of good people that inspire you, like Gary Robertson from Dundee, he’s some boy, ya know? He writes plays, writes books, does street poetry, he sings in a punk band and he plays the bagpipes. If eh could do half as good as Gary, eh’ll be doin’ well. If you’ve got a dream, then do it, you’ve gotta just keep goin’ and eventually you’ll get that break, everybody’s got a story in them!” 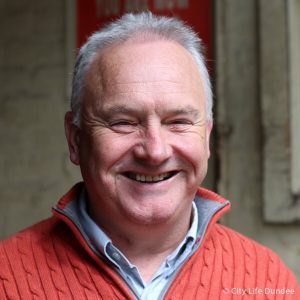 Brought up in Fintry (Fintry Shams)

Associate producer of Schemers, whose real life is portrayed in the film.

“The odds are against you doing it. The secret of life is persistence, just persist until you succeed, we’ve done that in life and now mirrored that in the film. I’m really proud o’ the story, even though some of the other crazy things that we got up to somehow never made the cut, ha ha! You’ve just got to take chances in life, so, if eh get meh money back, eh’ll be dae’in bloody cartwheels doon the high street, ha ha! If you believe in what you’re gonna do then you have to persevere, but you’ve got to go doon the right road though.”

Any reference to gang affiliation symbolised by the jersey colours displayed in this article in no way links any of the “Real-Life Schemers” to the auld Dundee gang culture of the seventies and eighties. Well, except for BBC Scotland’s The Rise of the Clans actor Steve Merton fae the Tap o’ the Hill, who is still happy to proclaim himself as the spiritual clan chief o’ the TOTH… and except for globetrotting, Netflix actor Gordon Morris fae Douglas, who has been known to shout “Toddy Rool” after a few half lager-shandies… and some of the others, who we can’t name for legal reasons, may have been known to shout things like “We are the Mid” and “Shams rool, ya bass”!

To read about the on-screen schemers of Dundee, click here, or use the menu below to navigate to other sections.