The Tattooed Women of Juteopolis 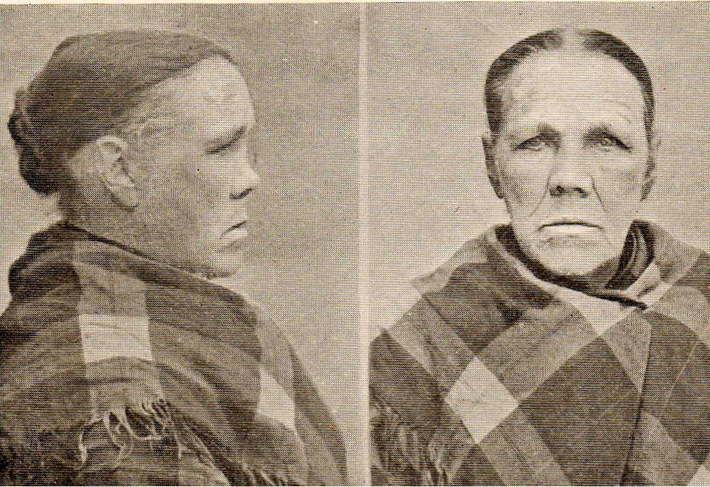 The public house, or pub, and the drink that it provided, was a major medium through which the distinctive working class culture of Juteopolis was forged and transmitted during the epoch of Jute. It was where singers and story tellers could succeed, at least for a brief moment, in taking the minds of their audiences away from the cares and worries of the day. The pub also played the role of social club and friendly society, as well as providing opportunities for networking and information on job vacancies in the absence of employment bureaus. The importance of women’s work, and the wages they earned, to the local economy meant that the Dundee pub was not a wholly masculine space, although this applied more to pubs at the lower end of the scale. Dundee pubs, as elsewhere, did not conform to one type: there was a major difference between ‘Mennies’ bar in the Perth road, with its inlaid mahogany fittings, and its clientele of skilled tradesmen, clerks and small business people and the likes of the ‘John O’ Groats’ pub frequented by the unskilled and the unemployed. Indeed, many of the meaner sort of Dundee’s pubs were little more than basic drinking dens, serving cut price liquor that could ease the path towards oblivion for the more desperate. Bob Stewart, who sold newspapers as a boy, described these drinking dens as ‘evil, smelly places’, characterised by the ‘stench of beer, the sawdust on the floor, the spittoons and the salt fish the publican kept on the counter because it gave the customers a thirst when they chewed it.’[1]

While it was frowned upon for the non-working wives of the ‘better sort’ of tradesman to be seen in the pub, the working women of Juteopolis could hold their own with the men at the bar as well as on the shop-floor. In fact, women mill workers were amongst the most resolute recidivists when it came to petty crimes such as ‘behaving while drunk in a disorderly and riotous manner’. Dundee pioneered a surveillance scheme, whereby the local police authorities kept detailed records, including photographs, of those convicted more than three times under the terms of the Inebriates Act 1898, which were circulated to all licensed premises in Dundee.[2] In 1905, it was recorded that a total of 30 out of 41 convictions involved workers within the jute industry, of which 27 were women workers. Of the eight convictions for ‘behaving while drunk in a riotous or disorderly manner’, seven belonged to women mill workers, including Mary Devannah, whilst the sole man convicted of this charge was John George who was employed as a mechanic in the Bank Street Works.[3] The precarious position of many of the women is underlined by the fact that 10, of the 34, were staying in lodging houses, with one staying at the East Poor House at the time of conviction, while seven were also unemployed. These women seemed to constitute a group whose lives were in the process of unravelling due to the influence of alcohol, poverty and personal misfortune. As they stared into the camera at police headquarters some, judging by their demeanour, must have known that the abyss beckoned them. 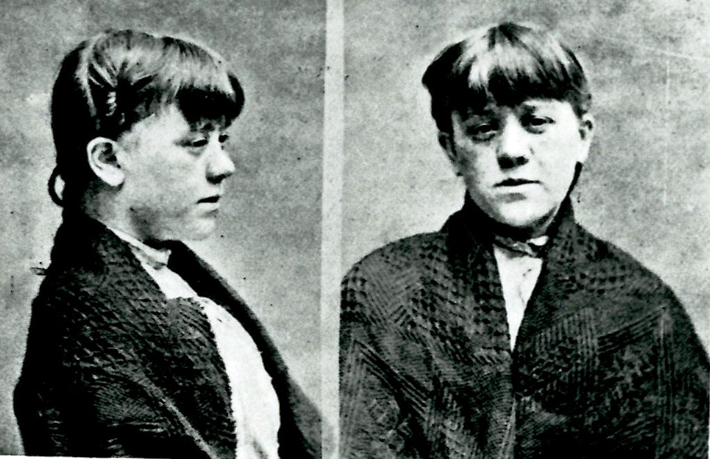 Whilst Dundee had more pubs per head of population than Glasgow, the city consistently had a lower rate of convictions for drunkenness during the period 1861-1901, although the rate more than doubled in both centres during this period, in stark contrast to Edinburgh where a sporadic downward trend in the numbers of convictions was experienced.[4] The Dundee Social Union Report of 1905, authored by Mary Walker, revealed ‘that the death rate in Dundee was .086 per 1000 of population for the year 1902…The corresponding percentage for the whole of Scotland was .069… [while] 1.2 per cent of the population [of Dundee] were apprehended for drunkenness.’[5] Part of the explanation for the increase in conviction rates may well lie in Bob Stewart’s observation that Dundee’s reputation as a ‘town of drunkards….really arose from the impoverished lives of the people. They were so poorly fed that a couple of nips of whisky and pint of beer was enough to send them into a drunken stupor’,[6] an observation equally applicable to Glasgow where speed-ups, retrenchment, and endemic underemployment also affected an industrial workforce struggling in the face of rising foreign competition and volatile export markets.

An especially interesting feature of the printed notices circulated by Dundee’s police authorities is the light they shine on the common practice of tattooing amongst the women of the urban poor, with 17 of the 34 women sporting tattoos including eleven mill workers and three spinners. Most tattoos were initials, probably referring to family relations and sweethearts and were sported by older as well as younger women. Bridget Glancey (main picture), a 60 year old mill worker at the Manhattan works, as well as having a broken nose, sported a blue mark on her brow and the initials E.G. on her left forearm.[7] In 1912, David Lennox also observed that ‘tattooing is a common habit in Angus and neighbourhood’, and suggested that the practice was a cultural survival from the areas Pictish past, noting that in ‘Angus and its neighbourhood….prehistoric “standing” or “hir-stones” are called “pech-stanes.”’[8] The word ‘pech’ is a local rendering of the term Pict, which derived from the ‘Latin “painteds”, a Roman nickname arising from an actual tendency amongst the northern peoples to apply pigment to their skin.’[9] However, it is more likely that the practice of tattooing in Dundee was of more recent origin. From the late eighteenth century onwards, the town’s seafarers became familiar with increasingly far-flung cultures and this may well have been the route through which tattooing came to be adopted in Dundee. The burgeoning trade with Bengal may well have brought the seamen of the town’s clippers into contact with groups such as the women of Banjera in East Bengal who tattooed their skin ‘in such a manner to appear as though the skin was a flowered fabric’, while the absence of tattoos on the thighs of young Burmese men was deemed to be emasculating.[10] International connections such as these may well serve as an explanation for the existence of tattooing in and around late Victorian Dundee, but tattooing amongst the women of the area is rarely, if ever, mentioned. Tattoos did enjoy a brief vogue amongst the British aristocracy, following the visit of the Prince of Wales to Palestine in 1862, when he had the Jerusalem cross tattooed on his arm. However, by the early 1900s elite attitudes had shifted, and tattooing was now seen as ‘an eccentricity of soldiers and sailors, and of many among the lower and often criminal classes of the great cities.’[11]

In 1890, Havelock Ellis, drawing on research conducted at Derby prison, observed that of 555 inmates only 41 (including one woman) sported tattoos, comprising ‘chiefly soldiers, with a few miners and sailors.’[12] This low incidence of tattooing, and its apparent absence within occupational groupings other than those mentioned by Ellis, marks the Dundee sample as highly unusual. Not only was tattooing practised widely within a female occupational grouping, it was also of long standing, as suggested by the fact that older women such as Bridget Glancey sported them. This is further borne out by the sophisticated nature of some of the Dundee women’s tattoos, indicating that they were not self-administered and that tattooing was common, and long standing, enough to have encouraged the development of specialised skills. There were designs that appeared to be common to both men and women (five of the seven men sported tattoos), including spiders webs, which appeared on the back of the hand between the thumb and forefinger, along with depictions of anchors and bracelets around the wrist. Two of the women mill workers also sported a highly distinctive tattoo, an enigmatic combination, comprising a heart visible on the back of the right hand along with a tombstone concealed on the left forearm. The exact meaning and significance of this design is elusive, but it serves as a potent symbol of the fragility of life, and love, within the often unforgiving milieu of Juteopolis.

This article is an excerpt from, Anthony Cox, Empire , Industry and Class: the imperial nexus of jute, 1840-1940, Abingdon, 2013. Anthony Cox, a lecturer with Life Long Learning Dundee. 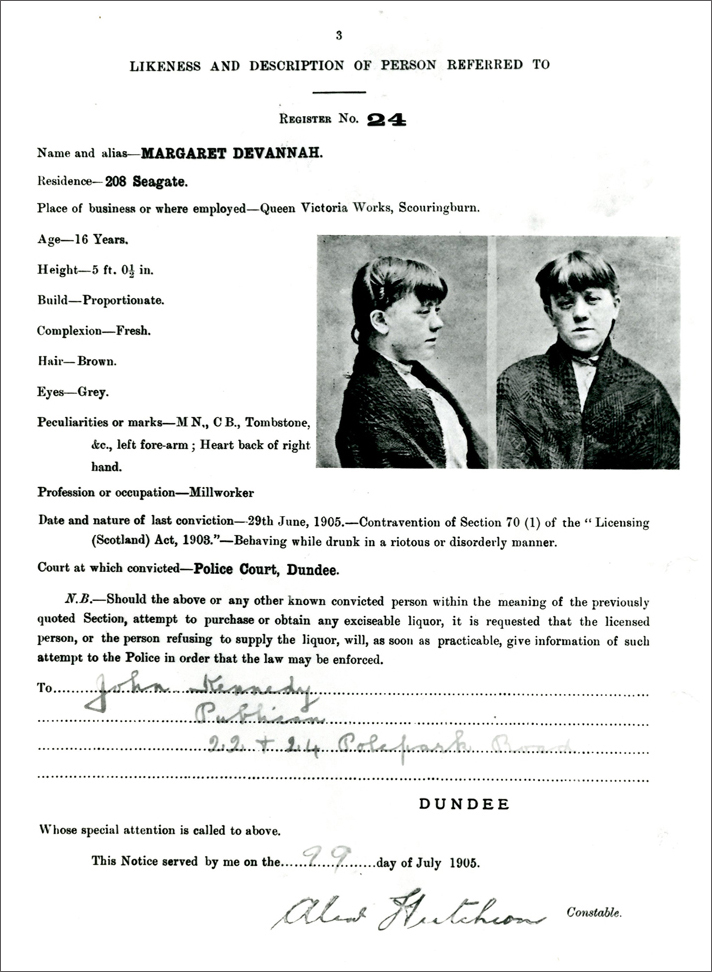 [4]David Lennox, ‘Working Class Life in Dundee, 1878-1905’, Ph.D thesis, St Andrews University (n.d., prob. 1906), Table 286, ‘Proportion of Licenses and Arrest for Drunkenness to Population in each of the three Principal Towns in Scotland’.

[9]See James E. Fraser, From Caledonia to Pictland: Scotland to 795, Edinburgh, 2009, pp. 47-8. It is believed that the creators of Scotland’s monumental standing stones drew their inspiration from body art, embroidery and jewellery.