The Origins of the Picts – Part 5 – Pictland Becomes Alba 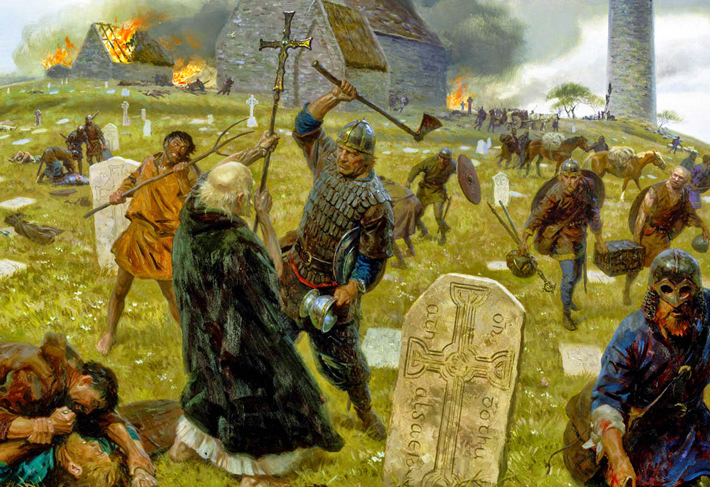 The Viking Age in these islands opened with the bloody looting of Lindisfarne monastery in 793. Two years later, the island of Iona, the centre of Celtic Christianity, was also targeted, along with Skye. Thus began a process of sacking, occupation and colonisation of the Scottish northern and western seaboards by Norwegian scaldingi (sea raiders) and the establishment of a de facto Viking kingdom, referred to in the Irish annals as Laithlinn. The Orkneys were the first of the Scottish islands to fall, and whilst the precise events that led to their takeover are lost to us, island folklore does include the following enigmatic legend of Norse origin;

“On Rousay it is told, according to Duncan Robertson, that the first Vikings who came to the island did not dare to land, because of beings looking like elves or trolls who stood in front of them with shining spears.” 1 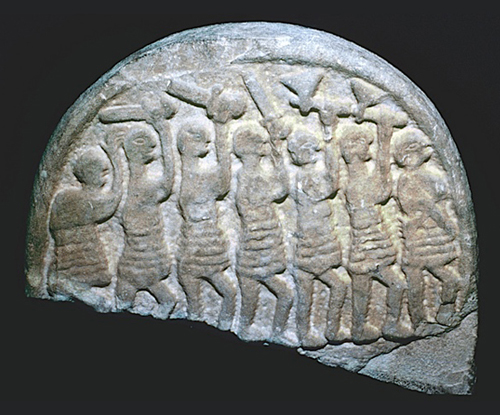 Despite the best efforts of the plucky ‘elves or trolls’ of Rousay, Orkney quickly succumbed, and Norse colonists and their families followed in the wake of the scaldingi, leading to the rapid disappearance of nearly all Pictish place names, and a substantial portion of the native population. It is surely no coincidence that the Rousay legend of ‘elves or trolls’ echoes other Norse observations regarding the diminutive stature of the Picts, which some have interpreted as a conscious effort on the part of the Norse to dehumanise the native Orcadians and justify their physical extermination. 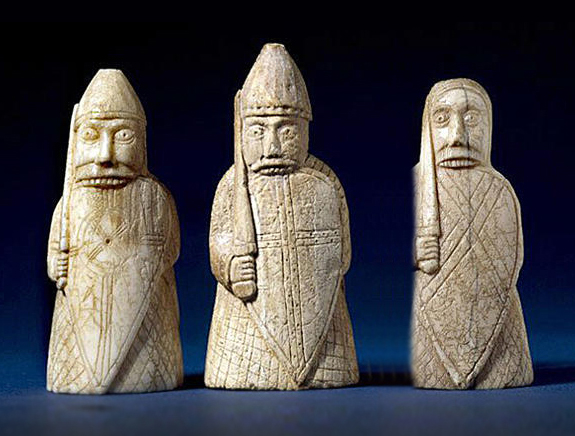 Berserkers, ‘the scaldingi’, from the Lewis chessmen

The Orkneys foothold quickly became a launching pad for further flung attacks on the western seaboard and Ireland, and by the mid ninth century Viking overlordship encompassed the Orkneys, the Shetland Isles, the Inner and Outer Hebrides, Man, Caithness, Sutherland, and Easter Ross to the shores of the Moray Firth. Over time, the western seaboard would come to be ruled by different dynasties of mixed-race strongmen (Gall-Gaedhil, Scandinavian Gaels), whilst the Orkneys and the Shetland Isles were controlled by Norwegian jarls, or earls, who, though owing formal allegiance to the Norwegian Kingship, were fiercely independent kings in their own right.

The relentless Norse penetration of the western seaboard eventually encompassed Dalriada, Argyll, depriving the Scots of their traditional homeland, thus forcing them to retreat inland, so rubbing up against the western borders of Pictland. Faced with intensifying pressure on their southern and western borders, the Picts also responded by retreating further eastwards. New religious and political centres were established; at Dunkeld, where a religious foundation was set up to house some of the relics of St Columba following the abandonment of Iona in 806-7, and at St Andrews in the 820s. Closer ties were also forged with the Scottic kindreds who had retreated east and north (along the great glen to Moray), and who would prove to be battle hardened allies in the desperate struggle that awaited the emerging Pictish-Scottic alliance.

Whilst the ‘traditional’ view maintains that Alba was created in the mid ninth century through a hostile takeover of Pictland by the Scots, under Kenneth MacAlpine, the historical convention is now shifting. We saw in an earlier article how the different tribes of Caledonia united to create Pictland in the face of Roman pressure, and Alba was forged under similar circumstances, by Scot and Pict uniting in the face of mutual annihilation. In the new view, the term Rex Pictorum (King of the Picts) becomes Ri Alban (King of Alba) following the switch from the use of Latin to vernacular in the writing of Scottish annals, from around the end of the ninth century, a change accepted by the Scottic and Pictish leaders as a new and politically neutral term for this emerging kingdom.2

The use of a Gaelic term to denote the new kingdom did not mean that the Picts were reduced to servile status, but simply confirmed the long established status of Gaelic as the written language of lettered Picts, by virtue of its close association with Irish Christian learning. Practiced and polished by monks, scribes, bards, and negotiators, Gaelic’s status was such that it was also increasingly adopted by the leading Pictish families of Alba, who became bilingual, speaking Gaelic at court, and Pictish when they were amongst their neighbours and the ‘sma fowk’ of their kindreds. Pictish did not suddenly disappear with the coming of Alba, but became the language of field and hearth, before, as the new millennium dawned, beginning a slow retreat into the glens and uplands of old Pictavia.

In 870, Dumbarton Rock, or Alt Cluit, the citadel of the Welsh speaking Britons of Strathclyde, was the next to fall to Norwegian raiders, the defenders being forced to surrender when their water supply ran out following an unprecedentedly long siege of four months. The fall of Alt Cluit also seemed to spell the beginning of the end for Pictland, as the new masters of the Clyde and Leven were now able to steer their longships right into the heart of central Scotland, and, through skilful navigation of tributary rivers, deep into southern Pictland. 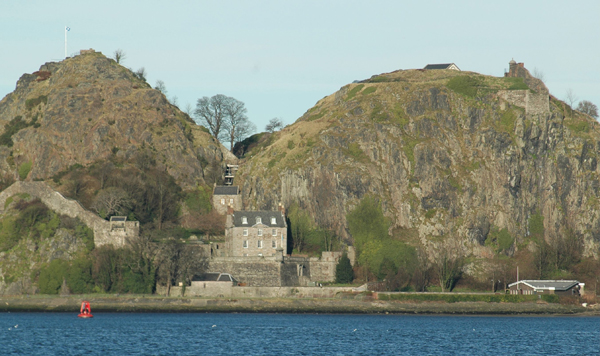 Whilst it was the glister of gold and silver that first drew the Norse raiders, the even greater lure of human cargo ensured their attacks were not limited to opportunistic piracy. Slavery had long been an accepted part of Pictish and Scottic society, but the Norse effectively transformed the sale of human flesh into a transcontinental commercial enterprise. During the raids of 870-1 alone, upwards of 10,000 captives were taken and sold in Dublin. From there they were transported through Scandinavia and along the river systems of eastern Europe, controlled by the Viking Rus, to the Black Sea; and thence to Constantinople, Baghdad and Damascus, where good prices were expected from traders who valued the fair hair and pale skins of their northern European purchases.

The old heartlands of Pictavia, in Moray, the north east, Angus, Fife and Perthshire beckoned to the scaldingi, whose appetite for plunder, and particularly slaves, seemed unquenchable. The decisive hammer blow, though, failed to arrive, chiefly because the Norwegian Vikings were kept busy securing their northern and western sea routes, whilst their Danish counterparts focused on eastern and southern sides of these islands. It was also the case, however, that Danish expansion in the east was limited by the continuing military effectiveness of the Picts.

The lack of DNA evidence and the smattering of Scandinavian place names confirm that Danish activity in eastern Scotland was largely limited to sporadic raids. However, evidence of raiding and short term settlement abounds. The evocatively named Corbie Knowe, or Crow hill, at the southern end of Lunan bay is the remains of a Danish fort, with the Corbie of the title referencing the then Danish royal flag. And a trading station was established in the early tenth century at what is now Dundee City Square, when the Danes briefly occupied the Tay basin. A long-standing tradition of an early eleventh century battle at Barry between the Danes and Scots has, despite a lack of archaeological or documentary evidence, excited the imaginations of generations of local historians. The earliest surviving reference to the battle dates from the sixteenth century when the Dundee historian Hector Boece, drawing on local tradition, linked a late Pictish standing cross, overlooking the Barrie peninsula, with ‘Camus’, who Boese claims as a fallen Danish king, despite there being no reference to such a figure in the historical record. 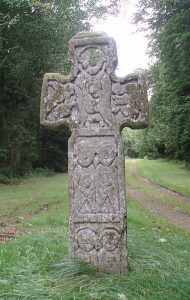 By the beginning of the tenth century, the Norse faced an emerging Celtic coalition united under a single kingship that was neither wholly Pictish nor Scottic in character. The old kingdoms of Pictavia and Dalriada had effectively disappeared, to be replaced by a new territorial entity known as Alba, the old Gaelic name for Britain. The first kings of Alba were able to cling to their traditional power base in eastern and northern Pictland, and to check the Norse advance. In 904, the Annals of Ulster noted that ‘Imar grandson of Imar [the conqueror of Dumbarton], was slain by the men of Fortiu [meaning ‘land of the Picts’, this is the last annalistic reference to ‘Fortriu’], and there was a great slaughter about him.’ Imar had overwintered on the Tay with his longships following a campaign of devastation in Angus and the Carse of Gowrie – the probable context for the establishment of their trading station at Dundee. The reference to ‘Fortriu’ suggests that he may have met his fate in Angus, or possibly the Mearns. The slaying of Imar eased the pressure on Alba, and forcibly demonstrated the continuing martial prowess of the old Pictavian heartlands.

New threats to Alba would, though, emerge, and its early kings would have to demonstrate a deft sleight of hand and gift for diplomatic manoeuvring in forging deals with their former Norse foes, particularly in order to check the emergence of English military and imperial ambitions. Southron ambitions in Alba would, though, founder as successive English kings clung desperately to power in the face of increasingly serious Danish raids. Scottish kings took full advantage of English distraction and military weakness to lead large scale raiding parties as far south as the Tees, and also laid claim to Cumbria and the Angle dominated Lothians. Dun Eiden (Edinburgh) fell in 962, whilst decisive victory at Carham in 1018 meant that Malcom II, styled Rex Scottorum, or King of the Scots, was now recognised as Overlord by the Angles of Lothian.

The term Rex Scottorum was adopted by Scottish Kings from the late tenth century onwards, to refer to themselves in Latin charters and diplomatic documents, although it is important to note that not everyone within the Kingdom of Alba were seen, or saw themselves, as Scots at this time. The Lothians, Strathclyde, Argyll, Moray and Galloway were seen as countries in their own right even when recognising – though often not recognising – the King of Scots as Overlord, whilst even many ‘Scots’ within the Kingdom’s earliest heartlands in the north and east probably did not recognise the term as describing themselves until the thirteenth century.3

As the twelfth century dawned, the long, bloody struggle in the face of Norse, and English, attempts at conquest seemed to have been checked, and the journey from tribal confederation to medieval state accomplished. The following century would, though, witness the emergence of a new and even more potentially fatal assault on Scottish sovereignty, through the Plantagenent imperial ambitions of Edward Longshanks.

3 As Dauvit Broun has pointed out, the modern meaning of Scotland ‘as the name of a country stretching from the Pentland Firth in the north to the Tweed in the south’ only materialised in the early thirteenth century.’ See Dauvit Broun, op.cit., p.7.