The Origins of the Picts – Part 2 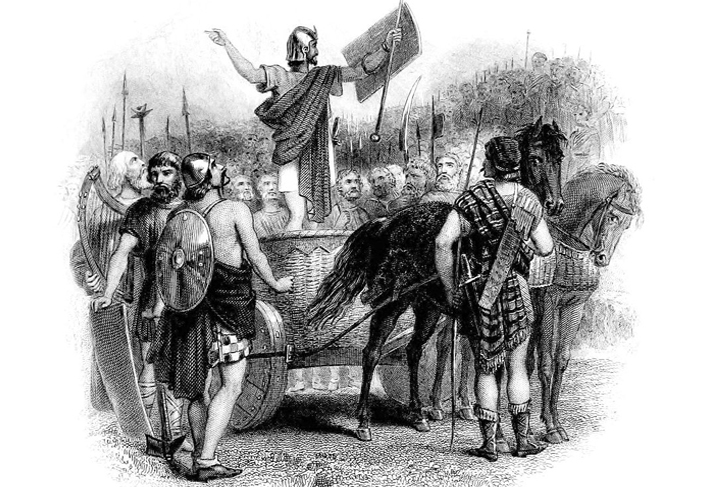 “The last of the free”

In AD81, Agricola, the recently appointed governor of Roman Britannia, led an army of 15,000-20,000 Roman legionairies and Batavian (Dutch Rhineland) and Tungrian (German Rhineland) auxiliaries over the Tweed and into Barbaricum in the north. It had been less than forty years since Claudius had ordered the invasion of southern Britain, and the Romans now appeared poised to bring the rest of the island to heel. Three years of northern campaigning culminated in the battle of Mons Graupius, probably located at Mount Bennachie in Aberdeenshire. The Romans faced a tribal confederation of 30,000 warriors drawn from Caledonia, encompassing Scotland north of the Forth-Clyde isthmus, commanded by an elected war leader, Calgacus (the swordsman), the first recorded native of Scotland, who, according to Tacitus, addressed his troops before the battle as ‘the last of the free’, and implored them to resist the Romans;

‘They are the only people on earth to whose covetousness both riches and poverty are equally tempting. To robbery, butchery, and rapine, they give the lying name of “government”; they create a desert and call it peace.’ (Tactitus, The Agricola and The Germania, 1970, p.81) 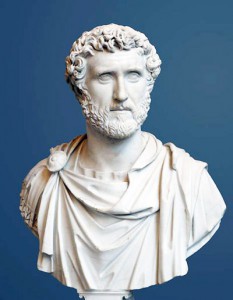 Whilst this stirring anti-imperialist diatribe probably reflects what Tactitus thought the ‘Swordsman’ should have said there is little doubt that Calgacus actually existed. Even more importantly, his election as war leader reveals how the Roman invasion acted as a crucible for the coming together of many of the tribes that had been identified by Agricola’s scouts during the northern campaign.

Despite a significant numerical advantage, and the fact that they held the high ground, the Caledonian confederation was decisively routed, after stubborn resistance, with losses of 10,000 compared to 360 Romans. It was a crushing defeat, but Caledonia never became part of Roman Britannia. In AD87, trouble on the Danube and the Rhine necessitated the hurried despatch of most of the British-based legions, whilst the Roman troops that remained in Barbaricum were withdrawn to southern Scotland.

The Romans, though, were not finished with Caledonia, and north-east Scotland became the focus of repeated military activity: during AD139-142, in the reign of Antonine, Roman forces harried Strathmore, which, with its rich loamy soil and densely concentrated soutteraini villagesii (as at Ardestie, Carlungie and Tealing) was an area of paramount strategic importance. Some historians believe that Strathmore was being forcibly integrated into the Roman military economy at this time, with grain possibly being shipped from the Tay, Barry, and the Montrose basin to the Forth to feed the legionairies who were constructing the Antonine Wall. Some also argue that the massive brochiii towers of Angus (Laws of Monifeith, Hurly Hawkin, Hill of Turin) are evidence of settlement by pro-Roman Orciv elites, who replaced local anti-Roman tribal leaders; or, alternatively, that the new architectural style was adopted by local pro-Roman elites to advertise their new found wealth and cosmopolitan tastes. (Ian Armit, Celtic Scotland, 1997, p.114-115.)

By the later second century, however, the soutterains had been backfilled, and Roman sources talk of major incursions south ‘across the wall’ and outrages committed by barbarian raiding parties. In a process of increasing amalgamation that would, ultimately, lead to the formation of Pictland, the earliest nation of the British Isles, only two large peoples now faced the Romans in Barbiracum in the north; the Maiatai (people of the larger part) and the Caledones (the hard men). 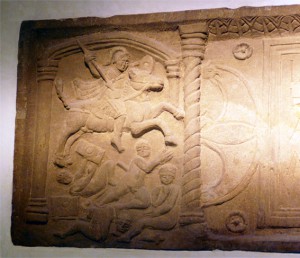 When Roman pay offs of gold and silver failed to keep the raiding parties at bay, Severus, the old and ailing emperor, pulled himself from his imperial sick bed and travelled across Europe to lead 50,000 battle hardened troops in a war of extermination against the Maiatai of Tayside. His rules of engagement spared no-one, ‘not even the babes in the womb’, but native resistance was equally ferocious. Roman casualties were high, as the Maiatai resorted to the kind of guerrilla tactics more recently adopted by the Taliban in Afghanistan. Faced by an enemy that refused to engage in pitched battle, a clear cut victory eluded Severus, in what would be his final campaign.

In AD210, shortly before he drew his last breath at Eboracum (York), Severus was forced to the negotiating table to face Argentocoxos, ‘the great chief of the Tay’. They met at the newly built fort of Carpow, situated near Newburgh, and the site of the bridgehead of a bridge of boats across the Tay, a major engineering feat commemorated on Roman coins. According to Cassius Dio, this clash of cultures was a grand affair, a mixture of imperial pomp and barbarian bling that also marked the entrance of Scotland’s earliest historically recorded woman – and what an entrance! Cassius Dio reported a remarkable tête-à-tête between the un-named Maiatian queen and Julia Domna, the Syrian wife of Severus;

‘When the empress was jesting with her, after the treaty, about the free intercourse of her sex with men in Britain, she replied: “We fulfil the demands of nature in a much better way than do you Roman women; for we consort openly with the best men, whereas you let yourselves be debauched in secret by the vilest.”’ (Cassius Dio, Roman History, lxxvii, p.246)

It is tempting to see this example of female Maiatian flyting as a founding event in the tradition of feisty Dundee women speaking truth to power, stretching down through the ages to the ‘Three Marys’ (Mary Slessor, Mary Lilly Walker and Mary Brooksbank) and beyond. Unfortunately, historians have dismissed this slice of classical celebrity gossip as little more than a literary convention employed by Dio to highlight Julia Domna’s promiscuous reputation. What cannot be dismissed in Dio’s account, however, is the depth and longevity of the resistance the Romans encountered in Strathmore and the Tay Valley – what would later become the heart of Pictland. Ultimately, the process of unification through resistance to Roman control culminated in the emergence of a nation, encompassing virtually the whole of Caledonia, which, as we shall see in the next article, proved capable of bringing Roman Britannia to the verge of collapse.

To read parts 1, 3 and 4 of this series please click the links below: